Yes, a good day. Cold and soggy outside, warm and creative inside.
From my point of view I was a bit crusty and rusty, also somewhat under the weather.
It took me ages to get my stuff sorted out having not gotten my act together before hand.
Using a guitar/amp and FX borrowed from friend 'JB' (which infact I used on ASR's very first session) along with new toy Ebow and my old Ensoniq keyboard with a stuck key, it was all a bit confusing for me. Too many options perchance.
Phil and Ian were champing at the bit to play the stuff they'd been working on while I pfaffed about.. Still eventually we had a bit of gelling towards the end.

Trying the ebow for the very first time. It's a powerful sound and easy to over do but fits right in with the sounds we're making.
Gotta sort out more practice times.. 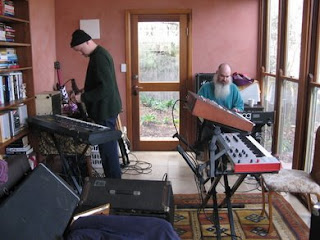 So Ian and I finally played with Rob again after many intervening months, going through all the tracks that we'd been working out as a duo. Shane came along as well to get some idea of what effects he could use to broaden our live sound. We did it at my place, in "Annette's room" flooded with light and with the garden just outside.

Rob has borrowed a guitar "rig" from an old friend and had to come to grips with all that. Oh, yes, and the ebow sounds mighty fine. I set up the Odyssey and the Ion although the poor old Arp is in serious need of another service (it's really just a great noise maker nowadays). It was terrific to play together as a group once more and the songs all made a little more sense. I think Ian felt more relaxed about his parts with Rob there to flesh out the palette.

I made a delicious Duck cous cous for lunch but we wanted to finish it up quick and get back in and play some more. At least one more group practise and, possibly, a live practise with PA for friends before our proper launch gigs.
Posted by Phil at 9:56 AM No comments:

Had to mention this. I've bought an Ebow off Ebay.
An Ebow http://www.ebow.com/ is a hand held battery operated magnetic gizmo that makes electric guitar strings vibrate continuously (well, as long as you hold it close enough)
Good for Frippy, Frithy, Edgey, Michael Brook-ey ethereal nuage-scapes.
It hasn't arrived yet. It's coming from New Zealand.

I had this idea of suspending it from the ceiling just above a guitar's pickup so that it makes an intermittent sound when I swing it..
Now to find an electric guitar..

Hi there,
the ever illusive Rob here.
Just thought I'd stick my ha'pence worth in..
Since the beginning of the year I've been working with a couple of bands other than A Slow RIP (gasp!), one of them, a rockabilly trio(gasp!!) has gigs most weekends plus the odd weeknight... I also work 5 days a week and have 2 kids (gasp!!!) so, yep, time and energy is at a premium these days.
That said, Da RIP is a really important part of my creative musical life (let's face it, musically speaking rockabilly isn't rocket science, infact it's not rocket science any other way either, but it is paying the bills, partially).
And now ASR has a real bona fide CD release, thanks to Endgame Records and there are a couple of performances lined up, though I hadn't really considered ASR to be a live entity in the sense of a giggling band...
I'm looking forward to the shows but at this stage have only a vague idea of what we are going to do.
So while Phil and Ian have been practicing, I haven't so much as plugged in a guitar. As I'm a happy improviser I'm not too worried although my main concern is that of gear. I don't have any.
When we record I borrow stuff or use what's lying around. Sadly I don't have a raft of gear and effects.
As Phil says we are having some kind of rehearsal this Saturday so, as the Illawarra's Premier Avant Trio lumbers into bemused existence, we shall see what transpires.
Posted by Rob at 12:54 PM 2 comments:

So Ian and I have been practising each week so that we can provide the best possible live performance you've ever seen!

Rob's so busy that he can't be involved in these but he's magically talented all the time and we're sure he'll be able to make us sound more brilliant than ever. No pressure, then. Both he and Shane are coming over next Saturday week to do it properly. Ha!

I bought some nice new leads from Allan's Music in Sydney last week. They're great but what a ridiculous store it is. The walk-in section has a million stupid guitars and amps with lots of bad musos testing riffs. Behind this is drums and then technical gear. Upstairs is all keyboards all the time. The synths they have are awful - all digital presets and imperfect manufacturing. Not one good brand amongst the tedium. Lots of gaffer for sale, though.

But I did order a new 3 tiered keyboard stand so that I don't break my gorgeous ion again and, ofcourse, so that i can look like a complete wanker. I was surprised that Allan's don't sell capes as well.

Ah, Wakeman will arise.
Posted by Phil at 5:47 PM No comments:

So I finished practising yesterday and was pleased that the fingers could actually perform well enough (just relax seems to be the way forward) and I moved the ion to the side of the room when... the X table on which it sits collapsed!

I'd bought a clip-on light so i could see things better that very day and the clip got smashed completely but, worst of all, the 2nd highest B key was at a 45 degree angle upwards and there was something rattling ominously inside my lovely, lovely synth. Not to mention the scratches on the bottom.

After swearing a lot, I pulled myself together, turned on the power and... it still plays beautifully. Even the broken key. Phew. I pulled myself together more, called up the servicing manual PDF and unscrewed the top from the bottom. Its quite a simple thing inside, really but the top is very heavy. The rattling was a small U-shaped part of the key which keeps it from going upwards as it's in tension with a small spring engaged at the back all the time.

I've talked to Tim V about the best glue to use and will try to fix it temporarily before Alesis can send me a replacement.

Disaster averted.
Posted by Phil at 8:14 AM No comments:

I'm practising madly to get my damned fingers to work in time for our live gigs in August/September. It's been so very long since I've had to make notes come out in some sort of order that my brain is frying trying even some simple combinations. Obviously, this isn't something that's required for 99.9% of our material but it's nice to mix it up a little bit.
Posted by Phil at 3:03 PM No comments: