A review (thanks Brooke - whoever you are):

Click on the pic to read the text, or just read my transcipt here:

"Illawarra trio A Slow Rip get off to a steady start on their double cd For The Time Being. The gradual introduction of synths and noises builds over each soundwave carefully, conjuring a dark and dreamy soundscape of tepid peaks and troughs.

The first cd is an eerie, tribal take on the ambient genre blending the supernatural with native noise. Obvious is the soft incline towards melody as each track progresses and declines instinctively. It's format reads like a story - a basic beginning, stormy journey and quietly resolved ending. In this way the album is somewhat formulaic but never typical.

The secound cd is less synth-, more percussion based, easing towards the lightness of bells and airy melodies. Where the dim hum of synths lurks on the first cd, the band chooses naked noise to dress the secound.

The band worked on the double cd for three years, with instruments wandering from your basic guitar and bass to virtual analogue synths. Their strength - and signature - lies in the end product of the natual and synthetic; a country/city hybrid as much day as it is night. To call their weakness the lack of variation would be ignorant. Variation exists in it's own intricate capacity.

It's not a party albumor a headphone record, nor is it standard background noise. It's an intelligent and perfectly executed collection of sounds, to be enjoyed by a discerning set of patient ears."

Endgame Ad (thanks Tegan and Cat): 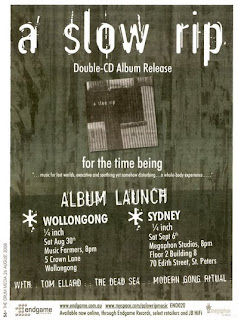 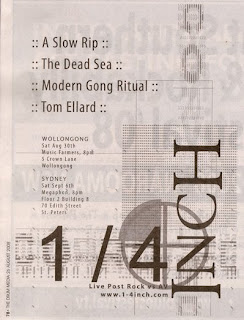 Before our 1st gig. At Thirroul Neighbourhood Centre which is a lovely old style country hall filled with lots of pics of cartoon characters... 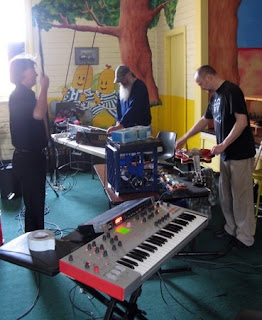 Tim setting up the marvellous little PA he supplied for free - thanks as always Tim and Happy Birthday too... 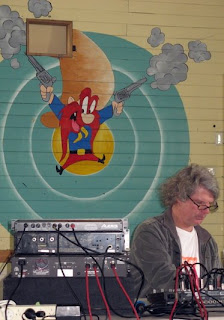 Shane weaving his magic behind the desk - it was great to hear the sound whirling round the room. 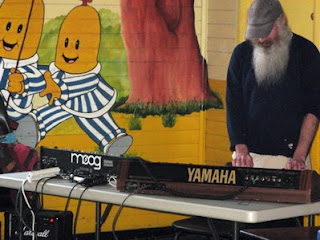 Ian in front of the bananas - nuff said. 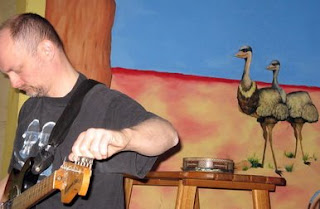 Rob suitably serious as he did the tuning up mantra.


Overall it was a terrific day with lots learnt about what to do. Hope to see you all there so you can experience our supreme power and majesty.

John (and Richard) at Background Noise interview Ian Miles and Shane Fahey about our release.
Posted by Phil at 7:23 PM No comments:

A SLOW RIP – For The Time Being (2-CD, Endgame Records)

Listening to the new A Slow Rip double-CD release is really taking a sound journey through a sometimes desolate landscape. You don't just listen to A Slow Rip because it is a whole-body experience, with the sound absolutely consuming you. It is often very filmic, evoking strong visual images and emotions.

The first CD opens with two pieces which are like a continuum. Hollow Bowl, followed by Hard Defined may have their roots in Brian Eno's Music for Films and Music for Airports, but they are really music for lost worlds, evocative and soothing yet somehow disturbing. And unsettling. Especially considering the following piece Devil in the Well which awakens the listener from their serenity. The remainder of the first CD is a perfect marriage of A Slow Rip’s members’ (Rob Laurie, Ian Miles and Phil Turnbull) deep-seated love of drone music, Terry Reilly, Krautrock, 70s electronic music (particularly Germanic), the English post-punk group This Heat, and musique concrete’s harsher sounds. There is plenty of Klaus Dinger (founder member of the krautrock group Neu) motorik drumming, rhythms for motoring on the German autobahns.

The pieces Catbird and Heat This (a kind of homage to their much-loved This Heat) are intense dronescapes with metal resonances reminiscent of Throbbing Gristle's film soundtrack from 30 years ago, After Cease to Exist (a soundtrack for the hypnotic surface of Tarkovsky's mysterious Solaris). For me the experience of the piece Certainly is a swirling void, sucking you towards the centre of a black hole. It is quite dizzying and conjures up intense images. What a rich and strong sound experience.

The second CD begins with a colourful, lively, almost-comical caricature, with the almost-comical title of Fricket. The second track Kalimbah Tweak has a really mechanical motorik rhythm which I must say is my favourite rhythm on the CD - motoring motorik. The third track is a very Germanic musical piece called The Court on the Left; bright and airy. On track four we are returned to the reflective music of the first CD with a perfect minimal drone piece reminiscent of Brian Eno sprinkled with delicate musical droplets (The Freeway Temple). This is followed by further dark journeying in Drift down Keira.

The layers and textures of the CDs are beautifully balanced and produced with really careful mastering and production. Drift Down Keira is like being in the midst of a sonic wind blowing across the Arctic tundra. The films of André Tarkovsky are brought to mind with their strong images and textures. Yes, that is the word, the sound is very textural. There is a probing of deep space with Box the Remainder, where other-worldliness is embraced. The remainder of the second CD travels between light and dark, with some beautiful and surprising musical elements.

Each CD has a very individual character. The dark cavernous regions which the music takes the listener to on the first CD are almost colourised by the second CD.

The members of A Slow Rip really use the instruments in inventive and non-obvious ways. Rob Laurie (mainly guitar), Ian Miles (moog Opus 3) and Sydney post-punk luminary and archivist Phil Turnbull (Odyssey and Ion), all live in the glorious northern beach suburbs of Wollongong, south of Sydney. There is a wonderful sense of place on the glorious coast where they live, surrounded by the very industrial coalmining industry. I initially thought of ‘rip’ as the force of the currents in the ocean off the coast where they live. This force is echoed in the soundscapes that A Slow Rip magically create. Although RIP also stands for their names - the best of double entendres.

Aside from the music the CD has been beautifully recorded and mastered, with incredible attention to sound details, separation, crispness and clarity. The three members obviously have a masterful studio technique and skill-like craftsmanship. Shane Fahey, from the Endgame label who are releasing the double CD, said that it was beautifully mixed via the painstaking work of Rob Laurie and that its full potential was unleashed with the attentive and excellent mastering of William Bowden. The design of the gatefold cardboard sleeve has been assembled sensitively and thoughtfully by Tegan Northwood (who runs Endgame Records with Shane Fahey) incorporating ethereal photography by Phil Turnbull from his photographic archive.

Although all of the musical elements which are so important to the members of A Slow Rip are present, the music is a unique blend and really unlike each of the elements on their own. It is a very rich tapestry and a very enriching musical experience immersing yourself in the two CDs. Much more than a listening experience it is really a whole body and mind experience. Riveting. Pure poetry.

For further information visit:
http://aslowrip.sevcom.com, http://www.endgame.com.au
Posted by Phil at 1:48 PM No comments:

Aaron from 1/4 Inch has posted band bios, comments etc at the 1/4" web site. He's also posted a 'stream' of tracks from us and the dead sea.
Posted by Phil at 9:43 AM No comments: