Another day, another Slow RIP gig...

Drove up from Austi with Ebags (Ian) with our gear rattling in the back, got to Abercrombie St but were confounded by the lack of access and parking (which I kind of expected) but also the lack of any sign of life from within the pub we were supposed to be playing in.
Long story short, an hour later we finally got in and loaded our gear into what passed for the beer garden out the back.

The Abercrombie Hotel was probably once one of many classic Sydney pubs serviced by the now demolished brewery next door.. but now, it would be fair to call it a classic inner city dive.
I don't frequent pubs much at all, except to play gigs in them, but I found the Abber's dark, dank, old-beer-smelly interior, lit only by down-lights with red gels gaffed over them, spray canned wall decor refreshingly unpretentious and totally preferable to the usual yuppiefied up-market be-chromed nonsense you find elsewhere these days.

I had a post-performance chillout moment by the pool table completely untroubled by human presence; kind of odd for a Saturday night, really. The weird post-neo-primitive-industro-techno music emanating (not too loudly)from the interior PA between sets was a perfect adjunct to staring balefully into the dimly red lit space with oscillating fan installation.
It smelt like 1989.

A Slow RIP were last to soundcheck and first to play which suited me.
Ian and Phil's wall of keyboards flanking me and my guitar flat on a stand, coffee table with electronic bits'n'pieces.
My set up is different each time I play and consequently takes longer to sort out and then there were the usual last minute technical sound hiccups, the ritual dropping of, falling apart and panicky reassembling of my E-bow.
Shane, who was mixing, did The Business performing his usual cool-under-pressure work for which we thank him once again...

So, the setting: Balmy evening in an inner-city pub beer garden under a waxing gibbous, the constant thrum of traffic, a back drop of gnarly trunks and leafy branches, a sound system on the edge of the void, only a vague idea of what I was about to do and we were off...
45 minutes later we stopped.

It's hard to describe what happens in between, not being a music/performance theoretician.
It is an intense, tightly focused inward journey through landscapes created in sound, which sounds totally pretentious but about sums it up.

It's like we set off as if we're a embarking on a grand family holiday, vehicle full of stuff, heads full of optimistic bravado until we go round a bend and find we're heading up a narrow wreckage strewn back alley to a probable deadend, or finding ourselves winding off-road into 4-wheel drive territory except we're only in a Nissan Bluebird with bald tyres and a shonky diff.
Other times wir fahr'n fahr'n fahr'n auf der Autobahn passing numinous light structures heading into a wide blue yonder, then bewilderingly becalmed in a sonic swamp with only a one legged singing duck for company.. Erm...
Once in a while I opened my eyes and found about 30 people in the audience.. but had immediately to dive back into to the wash to save a drowning siren.. stop stop...

Thankfully these synesthetical reflections don't occur while playing. it's all too linear, sucking us from one moment into the next moment.
Everything needs constant attention, attenuation for continuum continuation, there's no time for sitting back n' grooning to the muzak from a speaker in the shoe rack.

Then it was over, a small round of applause and it's get yer stuff off the stage for Makers of the Dead Travel Fast (and they do)

So our thanks and gratitude to Shane and the other gents who made it all happen..
See ya next time
Rob
Posted by Rob at 10:32 AM 3 comments:

As per below, we're in the final stages of completing our latest 'release' - Wheat and Nerve. It's a compilation of material culled from our last 2 sessions, some of it over 2 years old. Rob has mixed these to perfection, I've done some final tweaking and naming and I have an image in mind but the photos have yet to be taken.
I've added three of these tracks to our MySpace page so please have a listen and let us know what you think.
"Huge Whopper (Dedicated To)" is an hommage to Hugh Hopper - the recently deceased bass player from Soft Machine: a touchstone band for all 3 of us. It's a slowed down section of another piece and sounds uncannily like the tones that Hugh created on his great solo albums like "1984".
"Platform 5" is a very eerie track with foghorn tones, pulsing guitar and a dark, enclosing feel. If memory serves me, this was fairly similar to how it sounded live.
"Another Wall" is a bit cheerier. Based around a rhythmic patch I created on the Ion (but have failed to replicate since) it has Ian soloing on a Roland and Rob confounding us all with swathes of guitar (see A Laurie Driver).
Posted by Phil at 2:24 PM 1 comment:

Please let anyone with any interest know about the change
Posted by Phil at 10:46 AM No comments:

We're finally getting close to finishing the tracks that came out of last 2 recording sessions. It's been a tortuous, interupted process but Rob has found some time and, more importantly, a bundle of energy to apply his many and varied skills to the raw sounds.
My memories of these sessions are quite hazy as they happened so long ago but I think we all had a great time (that's not unusual) even if the resulting recordings weren't quite as immediately exciting as the others.
Even so, there's enough good material for Rob to weave his magic, resulting in about 60 mins of stuff. The tracks are quite dark and gloomy once again - more discordant than ambient. We're reasonably happy people, especially when playing together, so I have no idea why this side of our personality shines though so often.
The last listening session is on Monday, then track naming, etc, etc. Stay tuned...
..
Posted by Phil at 7:12 AM No comments: 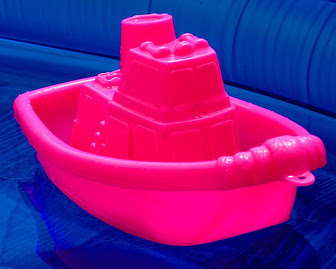 Here's Tim's explaination of his performance at Clifton:
1. Q: Three Tugs on, are they riven? A: They are three tugs on a river.
2. AKA "A Slow Rip"
3. or   an exercise in tactile synaethesia
I hope that clears it all up.
..
Posted by Phil at 9:02 AM No comments: 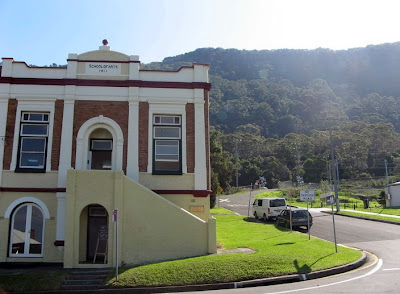 The day was gorgeous as you can see from the shot of the venue above. The hall itself was smaller than I'd remembered but it was perfect in any case. Tim's PA and nous with sound were likewise. Annette slaved over a hot entry with Drosma at her side and vowed never again. The crowd was hearty (a surprise in itself), welcoming and appreciative. Set 1 was only slightly prepared - start with a drone, perhaps? Oh, OK! There were some lovely sections - Ian as T. Riley is always a joy - but Rob slayed them with his manic display towards the end. Timmy Tugboat's project was secret even from us (especially from us, in fact). The river display with 3 plastic boats was fine but we couldn't see how the scrolls of material fitted in. They were miked up and pulled at and, eventually, rendered apart by hand - A Slow Rip indeed. The 2nd set was more prepared with a rhythm backing track (unusual for us) that worked pretty well overall. It segued into a soft padded 2 chord progression, simple yet meditative. Mr Mesmer made an appearance - hurrah.
Photos here: At Facebook
Musical Excerpts can be found at MySpace
Posted by Phil at 2:23 PM 1 comment:

An Afternoon At Clifton 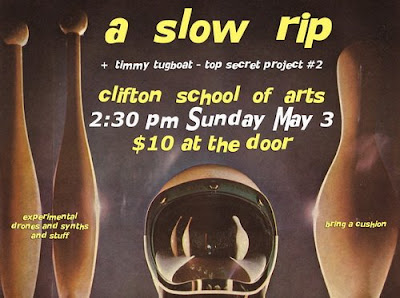 Yes! It's finally on. Here's the promotional guff:
“A Slow Rip” are hosting a Sunday afternoon of experimental music on the gorgeous Illawarra coast of New South Wales.
Venue:
The “Clifton School of Arts” is a small art space located just south of the newly erected tourist mecca - the Sea Cliff Bridge. It's a lovely room, full of history and faded (if renovated) elegance, and we hope that its relaxed atmosphere will inspire the players and invigorate the listeners.
Performers:
“A Slow Rip” are an improvisational trio steeped in their love of Krautrock, Musique Concrete, Drone, Post-Punk, Prog and Jazz. Since 2004 they have created 7 CD-Rs of material, the best of which was compiled onto the 2008 Endgame 2CD release “For The Time Being”. This is their 3rd live performance.
“Timmy Tugboat – Top Secret Project #2” is provided by one of Australia’s most respected sound engineers. Although the details must remain hush-hush, we expect frivolity and stern discipline in equal measure.
+++ possibly more to come
The Details:
Clifton School of Arts
338 Lawrence Hargraves Drive
Clifton NSW 2515
Australia
Southern Hemisphere
Earth
The Galaxy, etc
Sunday May 3rd 2:30-6:00 PM
$10 at the door (kids - whatever)
Bring A Cushion!!! [there's no seats]
Getting There:
Train: From Sydney Central departing 12:40, arriving at Scarborough 1:56. From the Gong trains arrive at Scarborough 12:42 and 2:42 so, if on the early train, you may want a refreshing beverage at the Scarbrough Hotel. It's a short walk north to the venue from the station.
Car: travel along the "Great Coast Road": the venue is just south of the Sea Cliff Bridge.
I hope you can all make it.
Posted by Phil at 8:18 AM No comments:

Fantastically popular with the DJs at WRUW. Thanks to one and all for the airplay.
..
Posted by Phil at 5:20 PM No comments:

In the summer of 2008 Australian label Endgame published For The Time Being, a 2-CD compilation by a trio “from the Northern beaches of Wollongong” named A Slow RIP, the last word an acronym for R(ob) Laurie, I(an) Miles and (P)hil Turnbull. These gentlemen, who definitely don’t look like snotty kids on the press release photos, express themselves through a whole array of instruments including guitars, bass, percussion, analogue synthesizers, winds and a few vocalizations.
They have been releasing quite a number of self-made CDRs over the years, from which the best tracks for this set were selected. Except for a couple of episodes overly tending to a kind of noisy psychedelia that conclude the first disc and sound positively second-rate, the experience of going through the entire set was mostly enjoyable. Avoiding the help of MIDI or any other electronic facilitation, ASR are heavily into stratifications of echoing resonances, arcane repetitiveness, revelatory ceremonials for jangling guitars and hypnotic keyboards; blurred terms of reference could be Pink Floyd circa A Saucerful Of Secrets, Djam Karet, early Aidan Baker, early Philip Glass and a chunky list of German cosmic couriers, with particular relevance to Ash Ra Tempel.
Considering the great diversity of the artists’ backgrounds (all multi-instrumentalist protagonists of the Australian alternative scene, from experimental jazz to post-punk), the record is surprisingly coherent with a poetry of the non-attack, a pleasurable journey indeed. Recommended for those who still like their dose of lysergic trance in the middle of an otherwise regular evening: certain chapters – “The Freeway Temple” and “Look Back” come to mind – are alone worth the price of admission.
..
Posted by Phil at 5:16 PM No comments:

Another broadcast and a gig

Sebastian Mendes will broadcast a substantial selection from 'For the Time Being' on his web radio show Yellow Radio this coming Saturday 21st March, from four to six: pm (Pacific Daylight Savings Time).

Also A Slow RIP will be performing on Sunday 3rd of May at Clifton School of Arts - times to be confirmed but 2.30pm sounds likely. Bring a cushion to sit on...