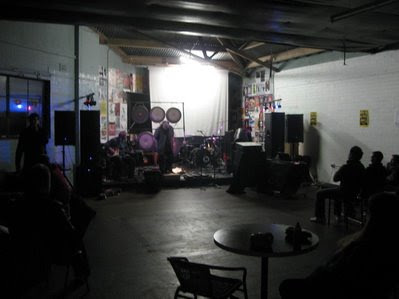 So, 1st gig in 23 years and I was surprisingly calm thoughout. I suppose I'm in some sort of middle-aged post-caring thought-stream or something. Back in the day my hands would have been sweaty and my pulse right up to the limit but now, except for one track, I really don't need to remember chord changes or, even, vocalisations whilst moving fingers over keyboards. In any case, I think it went pretty well. There were lots of good moments including a quite lovely end with "The Slug of Aznaroth" :-( and some hairy moments that Shane managed to fix with his magic SFX. The feedback was good including some unexpected positive comments from friends who, really, just turned up to be supportive. 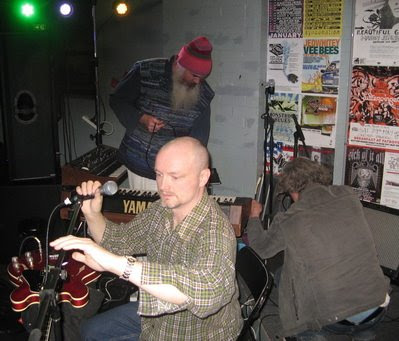 Modern Gong Ritual were slightly shambolic but good natured and sometimes quietly elevating. They're not too different from us except that we use synths rather than guits (and gongs) and I think we have a little more variety in the output. The use of the moo-cow thingy put Rob in a lather as he was hoping to use it to splendid effect as well. 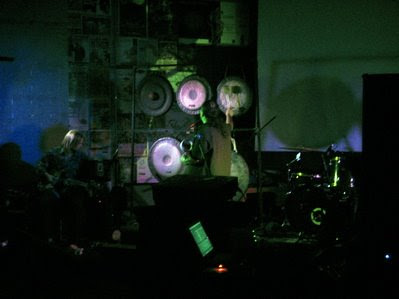 Tom Ellard was a hoot. I'd only ever spoken to him once or twice before and he hasn't seemed to have changed the sardonic humour one iota. The music was all over terrific in that electro-dance way he's perfected. Sometimes the videos were too chaotic for me but the one based on relgious TV imagery perfectly matched the less frenetic track. 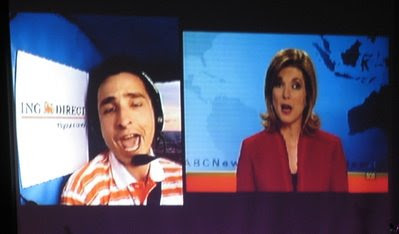 I didn't take any pics of The Dead Sea, unfortunately, as they had terrific, well matched visuals. They play a kind of heavy, grandiose, progressive post-rock that sounds enormously difficult to pull off. The array of stuff they utilse and the ease with which they use it is amazing as well. However it got a little loud and peircing for my ancient ears.

So... thanks must go to: Aaron for his unfailing positivy and calm; Shane for mixing everyone with clarity and aplomb; Tim V for gear and assistance; Tegan for promotions (and the rest); David for the polarised slides and all the others who helped to make it happen (including the lovely person who did all the stuff at the door - Emma).

Bring on next Saturday!
Posted by Phil at 2:17 PM